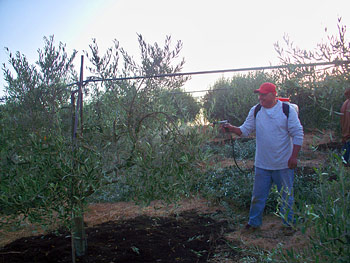 The olive tree is affected by some pests and diseases, although it has fewer problems than most fruit trees. Around the Mediterranean Sea the major pests is the medfly, the olive fruit fly [Dacus oleae].

In California, verticillium, a fungus disease that causes wilting and death is a serious fungal disease. There is no effective treatment other than to avoid planting in infested soils and removal of damaged trees and branches.

A bacterial disease known as olive knot is spread by pruning olive trees with infected tools during rainy months. Because the olive has fewer natural enemies than other crops, and because the oil in olives retains the odor of chemical treatments, the olive is one of the least sprayed crops.

The damaged fruit is susceptible to rot, can drop prematurely, and is useless as a table fruit. Usable olive oil can be made if the damage level is below about 10%, but the risk of off flavors and unacceptably high acidity rises as the damage level increases.